Your family, friends and teachers all expect you to go to uni. You’ve had the idea of university brainwashed into your mind since the day school began, but deep down you know that isn’t what you want to do. Let’s take a moment now to just do a big shout out to the mob who did decide to go to uni! But let’s also take a moment to remember that being successful doesn’t have to have a uni degree attached to it.

Year 12 was awful for me. I spent year 10 and 11 too consumed with a social life and working my casual job to even care enough to see what was beyond. I had this idea in my head that I was going to be a teacher, but I didn’t really stop to consider how I was going to do that. I obviously knew I needed to do further study, but I didn’t take the time to think about it much more than that. So, when year 12 rolled around and the anxiety set in with too much pressure, not enough motivation and no real support came into play, things went south, quick.

I felt at the start of the year I was really trying. I really wanted to do well. I have an older sister who got a 90+ ATAR score, so I’m sure you can appreciate the expectations and pressure on me to also do well. I’d do my homework and hand it in and wait for some feedback. I had an English teacher who had never taught VCE before, so I already felt like I’d been handed the short straw. But hey, we all have to start somewhere, so I tried to move on from the fact this was her first go. One day in class she was handing back our homework she had marked, but when she got to me, she had nothing to hand back. I questioned her on it and asked something along the lines of, ‘Hey, when are you going to give me feedback on that essay I wrote?’ No joke she looked me dead in the eyes and said, ‘I’m only helping the people who are trying.’ My blood was boiling, ‘How am I not trying though? I handed in my homework for you to mark like everyone else. How’s that not trying?’ The teacher went bright red and had nothing to say. I packed up my things and walk out. I never returned to her class. After that incident I really started to withdraw.

At the time I was upset. As an adult, all these years later I can’t help but think, was she thinking I wasn’t going to go anywhere anyway because I’m an Aboriginal person? That I couldn’t afford uni? Wasn’t smart enough? I guess I’ll never know, but it’s hard not to believe it’s because of the colour of my skin.

I was the only Aboriginal person in my friendship group, and maybe one of four Aboriginal students in my year level. It was a very hard year and I struggled to see how I could leave the small town I grew up in without a uni degree. I didn’t know where to begin and I didn’t know who to turn to for support.

Our ATAR’s came out early the following year. It was such a big build up and stressful time for me and the other year 12 students. I was dreading receiving the letter with my score. When the moment finally came, I froze, my stomach nearly felt out my moom and then the tears started. Thirteen years of school for an ATAR well below average. Did I not try hard enough? Did I skip studying for work too often? The weight of the pressure, the self-doubt and the opinions of others had affected me too much. 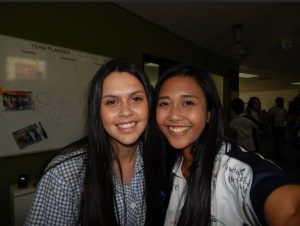 Morgan with her friend Erinina on their last day of year 12.

At the time that would have been the worst day of my life. My whole future came crashing down and I didn’t know what to do. My plans for teaching, gone. My dreams of moving away, postponed. My spirit, hurt, but not broken. But, that wasn’t the end for me. I’m such a self-determined, impatient, stubborn person who was not going to let a few numbers determine my future. It took me a while to build up the courage and figure out a plan. But I think in the end it all came down to a big bit of courage and the willpower to succeed. I continued working casually until April the year after I finished high school, then one day I woke up and decided I was going. I packed up my things, called my uncle to come around with the trailer, and just like that, I moved to Bendigo, two hours away from home.

I had no job, no family and no idea what I was going to do there. I had around $600 in the bank and prayed every night that someone would hire me. It took me around a month to find a job. The only one I could find was at a bakery. The pay was so horrible, and the work was so bad, but it was a job and it got me out of the house. I knew when I started working there that this wasn’t long term. I thought to myself, ‘If you’re not going to uni or doing anything meaningful with yourself. You’re going to get a traineeship.’ I looked for almost a year to find a traineeship. I was so dedicated and motivated to find one. I reckon I emailed every business in Bendigo. I finally got an interview and it was one of the worst interviews I’ve ever had. I felt awful when I left. But a few days later, they offered me the job. This workplace was such a learning experience for me.

After completing my traineeship within the year, I stayed on for another year and then found myself very negative and unmotivated towards work. I had a little moment of self-reflection and decided it was time to find something else. I was still quite young at the time and thought to myself, ‘You have 50+ years of work left, you are far too young to be this miserable.’ I searched around and stumbled across a cadetship that Victorian state government offer. I started working in state government in April 2018 on an entry level wage. I’m still working in government, at a much higher level than when I first started and am now onto my fifth role during this short amount of time. I’ve taken up many secondments, short term contracts and opportunities to ensure I am getting the most and best experience I can whilst I’m still young and not tied down to too many responsibilities. I work across Victoria with a range of different people of all kinds of skill levels and backgrounds. The knowledge and skills I have obtained is so invaluable.

My advice is to make the most of things. If you don’t think you’re qualified, smart, experienced or knowledgeable enough, just have a go. Apply for the jobs. Attend the interviews. If you don’t get the job, consider it a learning experience. Every interview or application you do, gives you a level up for the next one. One day, a job you reallllly want will come up, and you will have so much experience you will nail it and the job will be yours.

To those of you studying during the current pandemic, all I can say is well done. I remember how hard and overwhelming it all was in a simpler time. To be studying in the midst of such an uncertain period is real a credit to you. Remember whatever the number is on the bit of paper at the end, there is always another way to get what you want. Hard work, determination and a little bit of fire in your belly will help you work out another pathway if needed.

Believe in yourself and the knowledge you have.

You’ve sat that final exam. You celebrated the...

My people, my people by Banok Rind

[embed]https://www.youtube.com/watch?v=eusy4s4jSmw&feature=youtu.be[/embed] There’s mob from all...